Folk-influences have always been a big part of Parallax' sound, be it Japanese, Chinese, Middle-Eastern or Arabic, and we have played with several traditional musicians abroad in the past. So, doing a collaboration with a Norwegian folk musician seemed like a natural next step. And to our minds there was only one option - Anne Hytta.

From our tour in The Faroe Islands in 2016

Anne Hytta is such a fantastic player, and a musician we have the greatest respect for. While she is deeply rooted in the long traditions of her instrument, the Hardanger Fiddle, she also possesses an openness to other influences, and is always trying to break new ground and forge her own way.

Her open-mindedness and searching approach to music-making and interaction has much in common with Parallax'ethos and method, despite the fact that she comes from a completely different tradition. It was this quality that made us think she would be able to add new perspectives and ideas to our music, and at the same time be at the same wavelength in terms of approach. And we were incredibly happy when she agreed to work with us :-)

Parallax + Hytta became a reality in 2016 with some very fruitful rehearsal periods, some gigs in Norway and a fantastic trip to the Faroe Islands organized by the incomparable Kristian Blak.

This project differs from most of our other projects in many ways: Firstly it is all acoustic, and secondly it is composition-driven: there is still a lot of improvising going on, but we are always working within a predetermined framework. The transitions between the composed and improvised are sliding and we seek to balance the linear and melody based with opener and more abstract soundscapes. Even though one can say that the trio Parallax moves within jazz/contemporary music and that Anne Hytta is a folk musician, we are not trying to make a fusion of styles, but to create a unique expression that is the result of our backgrounds, references and preferences.

We released our debut album "Skogen" on the 16th of May 2018 as part of Parallax' 10th anniversary, and we are re-launching it alongside a live recording of the same music on the double-CD "Skogen/Asken" in september 2019. 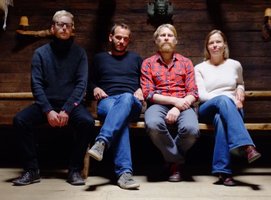 Anne Hytta (born 1974) is a performer of the Hardanger Fiddle, a fiddle with sympathetic strings and its own repertoire of traditional tunes. Her background is deeply founded in the highly distinctive playing style of the repertoire of traditional tunes for the Hardanger fiddle, and from this basis she composes and performs her own music in the solo production Draumsyn, her trio Slagr or other ensembles.

She has created her own solo performance Draumsyn consisting of new compositions for hardanger fiddle, viola d’amore and medieval vielle. The music was released on German label Carpe Diem January 2014 to great reviews both in Norwegian and foreign press.