Lydrommet first saw the day of light in 2010 because we wanted to present our music to children without making musical compromises. Children are playful and open by nature, and therefore very receptive to our playful and spontaneous improvisational music, but we anticipated its slow-moving nature might be a problem. We needed to make it visually interesting and exciting to keep their attention for 30 minutes and, because of its abstract and dynamic nature, we finally fell down on light design as the medium of choice. We were lucky enough to find Elisabeth Nilsson, who instantly recognised the potential of the project and got on board whole-heartedly. She has since been replaced by the very talented Evelina Dembacke, but continues to work with Parallax+Nilsson. We have also worked with Ida Andersson and Trude Dambo.

The basic idea of ​​the show is to transform any room into a separate universe by combining Parallax's   sonic universe and a simple light rig specially designed for improvisation. It's a playful spectacle that, without being specific, provides associations and appeals to the imagination using colors, contrasts, directions, shadows, reflections and time. The starting point is always the same: complete darkness and silence, but from there on Lydrommet takes a different course every time depending on the room, audience and our collective moods. The music and light follow each other in close interaction throughout the performance and, over the course of many years, we have developed a unique visual and musical language . The progress of the is a result of this interaction; Both the light and the music can take the lead - sometimes through set rules, other times completely free and intuitive.

Lydrommet premiered in autumn of 2010 at the ULTIMA festival i Oslo, and was picked up by Øystein Rasmussen at DKS Akershus for further development. The new and improved Lydrommet premiered in January 2012, and has since been a very popular, important and different performance for children in Norwegian schools. We have toured extensively, and have done more than 500 concerts in Akershus, Buskerud, Hedmark, Oppland, Telemark, Aust-Agder and Sør-Trøndelag, and at several Norwegian music festivals, including Moldejazz.

In 2017 we received this review by Periskop.(in Norwegian) 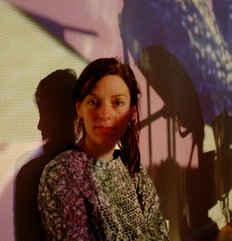 Evelina Dembacke is from Jönköping, Sweden and has been resident in Oslo since 2006. Dembacke works as a lighting designer in collaboration with artists within music, dance and theater. In addition, Dembacke makes her own projects in the form of lighting installation, decoration and photo. She received training in light and photography at Ljushögskolan in Jönköping, Karlstad University and Akademi Valand in Gothenburg.

In her work, Dembacke creates spaces that are associative, tactile and abstract. She draws on several techniques and influences to create a distinctly personal expression that challenges conventions and encourages reflection around the significance of light.

She mixes new and old technologies -   digital and analogue, for example reflection materials and reflective objects in combination with projection and modern lamps.